On September 24th George Wills visited the Good Spirits Co. in September 2018 as part of the Kilchoman Land Rover Tour. He's an extremely amiable chap, and a very entertaining speaker. These notes were written after the tasting had finished, whilst in conversation with a colleague, so I hope I wasn't too influenced by Mr Wills's bonhomie. 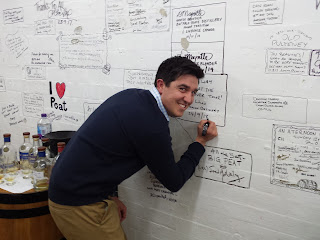 Kilchoman 100% Seventh Release, 50%
(having a half bottle of the previous batch of the 100% Islay to hand, it seemed only sensible to make the comparison. Although more than half full, it had been open for several months, possibly nearly a year, so I assume there's been some oxidation)
Nose: salty and coastal rather than overtly peaty (to be expected, given the lower peating level for Kilchoman's floor malted barley). Sharp, citric, & green. Banana goop. Waxy candles. A note of decayed vegetation.
Palate: Rounded & oily. There's plenty of vanilla, pepper, and an enjoyable funky note which I think relates to the decayed vegetation I found on the nose.
Conclusion: Tasty, but also somewhat raw. I like the green aspect.

Kilchoman 100% Islay Eighth Release, 50%
Nose: again, it's initially salty and coastal before sweet mellow peat comes in to play. There's a touch of the waxy candles found in the Seventh Release, but it ain't so strong.
Palate: fruity and rounded, with gentle peat and some hard to tease out (hence intriguing) funk. The finish is a bit aggressive.
Conclusion: I think I prefer the Seventh Release - but perhaps just because it's had a good airing?

Kilchoman Loch Gorm 2018, 46%
Nose: Wow, this is really funky. Kinda stinky like high ester Jamaican rums (Dunder!). Really, this is verging on Ledaig levels of funkiness. There's a mineral quality which I asssociate with sherry barrels too - unfortunately, I can't find a better word for it than petrol. (petrol as a tasting note is usually associated with the presence of terpenes, most often in relation to Riesling. But terpenes are found in sherries - see here and here for more information). There's also the classic sherry barrel note of struck matches. And lots of funk.
Palate: it's very sweet, but that's balanced by the salty character of the peat. It's also slightly on the sulphurous side - well within my sulphur comfort zone, but definitely not for everyone. Alongside the typical Kilchoman grassy funk, there is allso plenty of caramel and chocolate.
Conclusion: I love sherry and peat! This is a great example of the style, only let down by being a bit nippy in the finish.

Kilchoman Land Rover Tour 2018, 59.8%
(In other words, cask strength Machir Bay)
Nose: posh smoky vodka. Peat and funk. New make. Young, raw. Hairspray! (a note I find from time to time in Brackla. I have no idea what the common factor between Kilchoman and Brackla could possibly be). There's still plenty of the Kilchoman grassy funk.
Palate: Youthful. Raw. Hot and salty. With water it becomes much sweeter and less raw
Conclusion: what was that Ian Banks book again? Oh yes, "Raw Spirit". 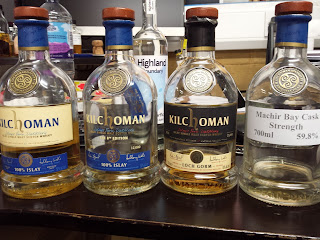 Kilchoman Sauternes Finish Cask Sample
(we were given this in lieu of the forthcoming Sauternes finished release, which isn't bottled yet. And yes, it's not in the picture. Nevertheless.)
Nose: sweet grassy smoke. Very clean - there seems to be rather less of the Kilchoman funk in this one. There's an oaky spiciness which reminds me of Lagavulin. With water it becomes syrup-sweet, and the peat smoke dies down.
Palate: wow, this is super sweet - icing sugar, jelly babies (yellow ones). It's light bodied and rather nippy. Interestingly, the aftertaste is much more about the savoury peat, which (unusually) is verging on umami. With water it seems to go from syrup to toffee, almost  into treacle. It's still nippy, and the oak spice has veered off into Oddfellows territory. The finish is a much more familiar earthy peat.
Conclusion: a decent dram, not too complex. Not my kind of whisky, apparently.

Of the five drams, I think my favourite on the night was the 100% Islay Seventh Release. I suspect this might be as much to do with what I'm enjoying at the moment, which seems to be veering slightly away from monster cask strength whisky.

I've had a bottle of the Land Rover Tour Machir Bay before (here's a video review by the Whisky Wuman) and I reckon I liked that quite a bit more than this year's.

If you like your peaty malts to have a bit of funk about them then you should definitely try Kilchoman. Also, they have absolutely the best artwork of any distillery showing how whisky is made. Check it out here. I can't find it! I do hope they haven't ditched it. Awww man, I think they've ditched it.
Posted by rodbod at 14:45