1998, the year this whisky was bottled. I was still a Laphroaig bore. Labour were still sticking to the previous government's spending plans. Scotch whisky was flourishing.

2012, at The Macallan distillery for the opening dinner of the Spirit of Speyside festival. The mashman, George, sitting beside me, declared that he didn't like smoky whiskies, so I got an extra measure of this rare gem.

Our table was sending out recce parties to bring back bottles of whisky, and Eddi Reader was giein it laldy in the background, but, nothing daunted, I stuck to my guns and took thorough notes. So how does a £5000 whisky taste? 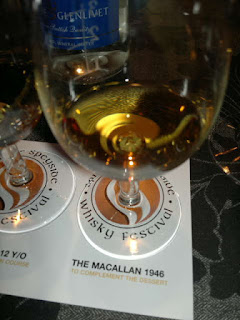 The nose is smoky, sherried, and powerful. It's a bit spirity, which is surprising in such an old dram. Dried fruits, digestive biscuits. Angelica? Icing sugar. Sweet toffee like a young dram. Lacy smoke like a very old Islay. Sweet cereal notes like a young whisky.

To taste, it is smooth but also has grippy tannins. There is an oily texture, it's sherried, and the smoke comes in at the end.

Retasting, I find maltiness, great finesse, and fresh—zingy—berry fruits; something like raspberry and strawberry fruit ice cream. Then the finish is grippy and woody.

I tasted it alongside the modern 10 Year Old Sherrywood Macallan, and while the older whisky is certainly more complex and has greater finesse, I also found it more powerful. How does that work?
Posted by rodbod at 22:47 No comments: