On one of those rare glorious days when the sun is blazing down from a cerulean sky and Scotland seems more beautiful than any other place on Earth, I made the three hour train journey to Dalwhinnie.

The distillery sits just to the north of the village, clearly visible with its whitewashed walls and neat wooden worm tubs. It's a compact distillery, rebuilt in the late 1930s after a disastrous fire, and it feels like it could be the original Victorian buildings. The large impressive worm tubs at the front of the distillery have just been renewed in 2015 and add to the spick and span feel. It's a Diageo distillery, so no photography, which is a bit of a shame, as the mash tun is housed in what was a malt kiln, so there's a fantastic view of Charles Doig's roof from the inside. 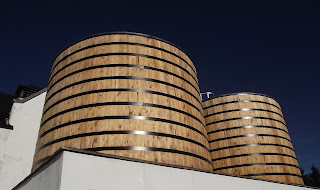 Diageo also means a tightly scripted tour, but I was very lucky to have an enthusiastic guide who was happy to address my many supplementary questions. The guide gave a very thorough explanation of the whisky making process, and talked about Dalwhinnie's now abandoned experiment with shell & tube condensers, and how worm tubs are an essential component of the Dalwhinnie character. It was also interesting to learn that Dalwhinnie controls fermentation times by raising the temperature to kill the yeast. 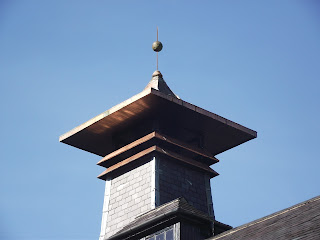 The tun room has one 60,000 litre full lauter mash tun, with the rakes set high so as not to disturb the cereal bed, thus leading to a clear worts. There are six wooden washbacks, which ferment for about 60 hours, to produce a wash of about 9% alcohol.

The stills are large, lantern style, and they are worked hot, so that the spirit vapours don't get too much copper contact.

Dalwhinnie produces about 1 million litres a year. Most of this is stored elsewhere, with only a few thousand casks held onsite, in both racking and dunnage warehouses.

The recipe for Dalwhinnie, so to speak, is to make a fruity wash, distil it quite fast in big stills which don't give much reflux, and cool it rapidly with extremely cold water. The result is a new make spirit which is fruity, but also has a sulphur note. Consequently, the spirit needs long ageing, so as to reduce the sulphur to a trace, a suggestion of meatiness and a fuller body.

After the tour I did the Friends tasting, which includes five different expressions of Dalwhinnie, plus the new make spirit. I would sum up Dalwhinnie thusly:

* The variations on the basic theme of the 15 Year Old don't really go anywhere very exciting. The Distillers Edition is allegedly sherried, but you would hardly know. The two outstanding drams were the 25 Year Old (which cost north of £300), and a 1991 cask sample which was delicious, but where the cask character was very dominant. (This is not necessarily a bad thing, but to approach perfection a whisky ought to meld a distinctive spirit with good wood in a way which lets both shine without either dominating)

I had quite a bit of time to kill before getting the train home, so I went for a wander to the south end of the village. It was an absolute belter of a day, and I ended up getting slightly sunburnt, but it was worth it. Just look at that beautiful, beautiful view: