It seems that the current trend for established distilleries to add whiskies of unspecified age continues apace. June saw a re-arranging of the Glen Scotia range, with three age statement malts being dropped and two new non-age whiskies replacing them. Now Oban is the latest to join in the fun. Little Bay will be available very soon, and it was on tasting at Whisky Fringe 2015. 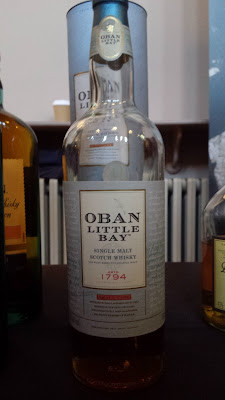 Obviously a whisky festival isn't the best place to get to know a new dram, but I scribbled my notes and then discussed the whisky with a couple of other folk, and there did seem to be a fairly solid consensus. Our conclusion: meh.

It's not a bad whisky, in fact it's fairly decent, and bears a family resemblance to the 14 Year Old. On the nose I found salty-sweet caramel, and a gristy (youthful?) and heathery note. The palate was initially fruity (grapefruit, perhaps), and then very sweet, and somewhat earthy and woody.

But it's certainly no better than the 14. I was told by Diageo's personable young brand ambassador that the whisky is vatted from a selection of normal casks before being being put to quarter casks for a second maturation.  Well, I'm pretty positive that they're not fresh quarter casks.

All in all, it's hard to be enthusiastic about a new release which isn't any better than the existing product, which meets a producer's need, rather than any burning desire the consumer might have for new and different malts. So, Oban Little Bay, meh.
Posted by rodbod at 03:00 No comments: 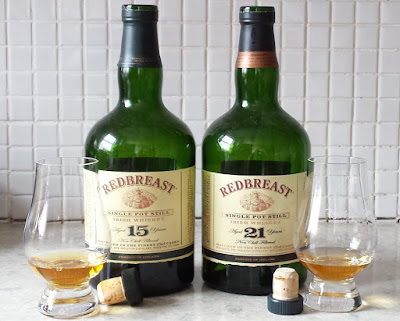 nose: sweet and nutty, oily, sherried, mellow, and with a slight rum-like note. Definitely oily, in a mineralic way. With water it seems more rummy, sweeter, and curiously more oily.
palate: burnt brown sugar, oily, slightly mineral. A little fruity and rather woody. The finish is all dark wood and gravy browning. Overall very grippy, even chewy. With water it becomes softer, although still somewhat chewy. The flavours open up into icing sugar, toffee, dry spices, and oak. The finish now longer and more mellow.

nose: rather more high toned than the 15. Similarly rummy, but also very nutty and oily - linseed oil. Over time the tones darken, and some oily red fruit comes out (red apple oleosaccharum perhaps).With water it becomes huge; savoury-sweet like Jamaican rum, thick, meaty, with old sherry wood, and a sweet brandy snap note.
palate: very rummy (Jamaican for sure), with green fruits, ice cream and warm brown spices. The finish is very hot and spicy, but also like rum ice cream. The aftertaste is savoury-herbal. With water some malt comes out, and the savoury notes grow stronger. The finish is very long.

The Redbreast 21 Year Old is an absolutely immense dram, with intense,complex flavours. The pure pot still style of whiskey makes for a thick, mouth-coating kind of whisky which is deeply satisfying to drink. If you are tired the 21 will overwhelm you, so it's a dram for early in the evening.

The 15 Year Old is rather easier to drink, while still offering the same thick, oily mouthfeel and rich fruity flavours. A great after dinner drink.

I tasted these two alongside samples of Redbreast 12, Powers John's Lane, and Midleton Barry Crockett Legacy. The Redbreast 21 was, for me, head and shoulders above all the others.

Fermented from a mix of malted and unmalted barley, and then triple distilled in pot stills, this uniquely Irish style evolved in the 19th century as a way of coping with onerous malt taxes.

As Irish whiskey declined, it became less and less important, until only Midleton distillery near Cork continued to make it, with Redbreast as the standard bearer for the style. Now that Irish whiskey is once again on the rise, I hope we'll see more and more of this lovely style of whiskey.
Posted by rodbod at 02:28 No comments: