The most exciting whisky release of 2018, despite the high cost, is undoubtedly the first official bottling from Daftmill.

I was lucky enough to taste a wee sample of it, brought back from the launch event by colleagues who were in Fife to see the first bottle opened, and then tasted it again the other night at Glasgow's Whisky Club.

Most new distillers have a pressing need to bring in some cash to recoup their outlay, but the Cuthbert brothers were in the fortunate position of growing barley and also of having some old buildings going spare that could be used for distilling and warehousing. Hence, despite the endless questioning as to when it might be bottled, Daftmill has only now been released, as a twelve year old (I would have asked the question myself, but we were forewarned by Francis Cuthbert not to do so, on pain of eviction from the distillery). 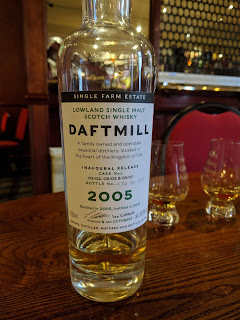 And so to the liquid. Bottled at 55.8%, this is a vatting of three casks filled in December 2005, all first fill ex-Heaven Hill bourbon barrels.

nose: white chocolate or chantilly cream, soft, but also somewhat spirity. Is that mocha coffee?
something sharp and grassy - perhaps a minty note? The oak spices are beautiful.

palate: it's malty, dry, and rich, getting more and more malty in the finish. The texture is slightly oily. There are flavours of coconut, loads of sweet boiled fruit notes, plus something fresh - green apples and mint I think.

conclusion: it's a very good twelve year old. Is it outstanding? I'm not sure I'd go that far, but it is lovely. Is it a Lowland whisky? Well, it certainly doesn't conform to my mental model of that style. It's too rich and malty, although there is something light and grassy in there somewhere.

Is it worth £210? Of course not, but while whisky's equivalent of tulipomania continues, it makes sense for Daftmill and Berry Brothers to benefit, rather than the *!?@$** flippers and auction houses.

Future releases will consist of a regular Summer Distillation and a Winter Distillation, plus occasional single casks. The regular releases will be priced around the £100 mark - still expensive compared with, say, Glenfiddich 12, but considering how Daftmill is made, not at all unreasonable.

£210 is far beyond my whisky budget, and indeed the consensus at the club was that most people wouldn't buy it. So much the better, then, that we were able to taste it as a group.

Dufftown is one of three malts bottled with near-identical labelling, and in a slightly unusual hip-flaskish bottle. Why this should be the case is a matter for another day.

Aside from the twelve and eighteen year old expressions, there are some fancifully named releases without an age statement. Similarly, this latest expression lacks an age, but bears a more traditional or old-fashioned name.

In full then, it's The Singleton of Dufftown Malt Master's Selection. 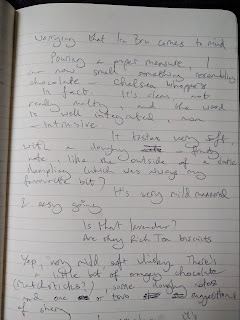 If you have the patience, you can click or tap on the picture of my tasting note and read it in full. For those of you in a hurry, here's the executive summary, plus analysis.

It's a gentle, easy drinking, well balanced dram. I found flavour notes of:-

In other words, a mild mannered refill sherry barrel whisky.

I think many seasoned malt drinkers would find it a bit too light, or would use it as their warm-up dram. On the other hand, if you're looking for a change of pace from Johnnie Walker but want to keep that ultra-smooth palate and texture, then this is for you.
Posted by rodbod at 09:16 No comments: