Old and Rare and Obscure

Last week's Old & Rare show at the Grand Central Hotel in Glasgow—the first of many, I hope—was enormous fun. Catching up with whisky friends, tasting amazing old whiskies; it's just a pity it couldn't have lasted longer.

I was in attendance with colleagues, and was constantly being invited to try ever more delicious, ever more ancient drams. My notes are not the clearest, but there are definitely remarks regarding a Berry Brothers Highland Park 1957, a Port Ellen 25, Mortlach 1954, and a Cadenhead's Glentauchers 38 Year Old.

Whilst it is a delight to sample such fine malts, there's some perverse part of me that discounts them. Of course old school Highland Park will taste stunning. Naturally a well aged Port Ellen will impress. What really drew my attention was the opportunity to taste whiskies which don't have such a reputation. I'm not sure why, but finding a Mosstowie and a Glen Albyn, not to mention a humble Connoisseurs Choice Royal Brackla, really made my day. So here, then, are my notes on a five year old Auchentoshan and a twenty-one year old Glen Albyn.

Glentoshan 5 Year Old (40°, for the Italian market)
Nose: initially cabbage, but that soon clears. Very rich and fruity - much more fruity than modern Auchentoshan. After a while a light elegant perfume (which is much more what I expect from Auchentoshan).

Palate: very sweet and light, and it has the prickle of youth. There's a touch of fustiness in the finish. As with the nose, it seems much sweeter than I'd expect from an Auchie. There's a light, grassy or barley element, much like modern Auchentoshan. And of course this whisky has the very characteristic silky texture of spirit which has been long in the bottle.

Conclusion: it's often said that malts were much fruitier before about 1980, and this one certainly fits with that. But I could see a continuity between this dram and modern expressions from the distillery.

Glen Albyn 21 Year Old (40°, distilled 1963, bottled by Gordon & Macphail)
Nose: interesting. It's very fresh, considering it's age, and there's a lot going on. It's herbal, spicy, and fruity. Plus, there's a good dose of old wood. Not sherry or bourbon barrels, just old wood. And is that something minty?

Palate: milky sweet, soft, and round. So very soft and gentle, but definitely not watery or lacking in flavour. There's a sherry wood umami note, and then some red fruits come through - plums, I should think. Just like the Glentoshan this dram has a silky smooth texture.

Conclusion: A very fine dram indeed. Based on a sample size of one, it seems almost criminal that the distillery was closed.
Posted by rodbod at 01:01 No comments:

I keep having the same sort of argument with different people about terroir and whisky, most recently with @maltreview and @WhiskyPilgrim. Since Twitter doesn't lend itself well to lengthy exposition, here's a blog post instead.

The notion of terroir is deeply bound up with wine, and with France. The word itself is French, although my copy of Hachette unhelpfully translates it as "land". The Oxford Companion to Wine offers the slightly more useful "total natural environment of any viticultural site". The Companion then goes on for some two or three thousand closely spaced words which—and I hope my twitter antagonists can agree—don't really serve to settle the matter definitively.

But I think all sides can agree that a terroir wine has flavours unique to the place where its grapes were grown and where it was made.

How, then, does this idea transpose into Scotch whisky? I would argue that it doesn't.

We can straight away disregard the hundred plus distilleries who buy their malt from Crisps or Bairds or whatever, since that barley is sourced from all over the UK and beyond. For them, there can not be the total natural environment of the triticultural site. Their barley is not site specific.

But even when we look at Springbank or Bruichladdich or Ballindalloch, the idea of a flavour unique to the place where the barley is grown does not stand up to any sort of scrutiny.

That's because the analogy with winemaking is just that, an analogy - and a poor one at that. Wine is the all but inevitable consequence of not drinking the grape juice, of leaving the juice to rot. Humans need do little more than pick and press the grapes and something wonderful (or at least drinkable) will result. Whereas whisky is the end result of a multi stage process, with each stage contributing flavours. The human element is far more important than in wine making.

From the peating level of the malt to the length of fermentation to the shape of the stills to how the stills are run to the choice of casks, all these human choices contribute much more than the place where the barley is grown.

We see this in the resulting product. Yes, Bruichladdich's Islay barley bottlings are slightly different from their Scottish barley expressions - but they are unmistakeably, first and foremost, Laddies. And Springbank's Local Barley bottlings differ from other Springers of similar age and cask type, but they are most definitely Springbank.

By contrast, were Laphroaig to take barley from Rockside farm and turn it into whisky according to the Laphroaig method and procedure, which would it more resemble, Laphroaig 10 or Bruichladdich Islay Barley?

The unvoiced answer to this rhetorical question is why we talk about distillery character and not barley field character. Whisky terroir does not exist.

This Tasting Note Is Not Standards Compliant

I spilled some Longrow just now, and the aroma is very intriguing: almond pasty, the 1970s, shiny silver balls, eaux de vie, almonds, rolling tobacco, something sweet
Posted by rodbod at 02:48 No comments: 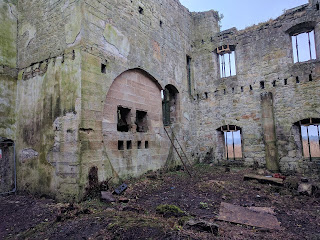 You can learn much more about Kennetpans and the Haig and Stein families at the Kennetpans trust website, where you can also make a donation to support the work of rescuing the structure.
Posted by rodbod at 15:05 No comments: