Although it rather seems to have been superseded in recent decades, the kitemark scheme was generally some sort of guarantee of reasonable quality. Doubtless it was, or is, as fallible as any other human run scheme, but to my youthful eyes it always seemed like a Good Thing.

Last night's meeting  of Glasgow's Whisky Club reminded me once again that there's a crying need for some mechanism whereby the whisky drinkers can be alerted to the presence of whisky for collectors, thus saving themselves the pain of overpriced, underperforming malt, and leaving more sealed bottles for the auction fiends.

The day had started with the unexpected appearance of two new drams from Compass Box, Flaming Heart 2015 and This is not a Luxury Whisky. A tasting of the latter quickly revealed that it wasn't worth the asking price, which arguably is almost the definition of a luxury good. 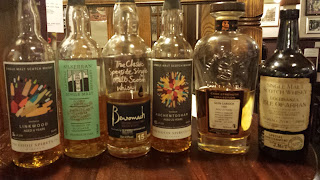 The Club night featured only one standard dram. It was a strong line up, with the dram of the night being an Auchentoshan 22 Year Old (bottled by the Creative Whisky Co. for my employer, the Good Spirits Co.)

But the shiny bottle, the one that provoked the most chat, was the new Arran Illicit Stills Volume 1. It was a fine drop, and didn't seem too youthful, albeit somewhat harsh in the finish. As with the Compass Box in the morning, the complexity of the dram didn't justify the price tag. However, the blooming thing is all sold out already. A quick rummage online suggests most retailers presold their stock. And that's despite there being 8700 bottles. What the heck?

So. We need some sort of classification or scheme whereby collectable whisky is separated out from the drinking drams. If bottles such as This is not a Luxury and Illicit Stills were marked with a 'guaranteed collectable' kitemark, then those of us who prefer their whisky to taste good, first, last, and foremost can safely pass them by and go find something tasty in an ugly container.