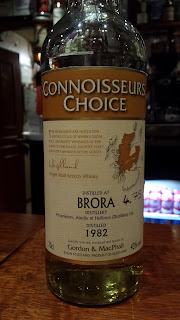 I've been lucky enough to taste a handful of Broras over the years (once even at Clynelish distillery), and like many people, I consider it to be one of the finest old malts to be had.

On the other hand, the Connoisseurs Choice label tends not to be held in such esteem. It is indeed admirable that Gordon & Macphail offer so many different malts under so many labels, but they can't all be good, and in my experience the poorer ones end up as Connoisseurs Choice.

So it was a delightful surprise to find this dram so delicious. The nose was powerfully fruity, all ripe yellows and reds, with a strong strand of wax, and all very sweet. This being a late period Brora, there is no smoke to found. 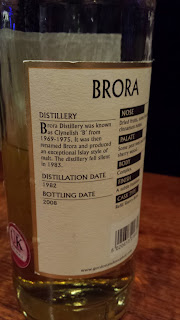 The palate was even sweeter than the nose had suggested, with strong red apple notes and something yellow which might have been mango. The sweetness reminded me of brown sugar, and towards the finish I found a touch of beery malt. By the time I had finished the dram it was becoming a little astringent in the finish.

When Brora is peaty, the fruity flavours slip into the background, but this unpeated example served to emphasise the kinship between it and Clynelish. There's very few things to beat that ultra ripe fruit character in a whisky, and very few distilleries that can do it like Clynelish and Brora.

Brora, by the way, stands as a fine example of how the Scotch industry is so bad at forecasting. The old Clynelish distillery was closed when a much larger replacement was built next door in the mid 1960s. Shortly after that the owners (unexpectedly!) found themselves short of peated spirit and reopened the old distillery to cope, calling it Clynelish B and then, after a while, Brora. Then in the early 1980s another unforseen fluctuation (downwards this time) led to the final closure of Brora. Although, if you ask me, it didn't look too dilapidated when I was shown round...