The Manzanilla of the North

The blessèd Michael Jackson knew how to turn a well formed phrase, and he was the writer I turned to when I was first trying to learn more about Scotch, but some of the things he wrote about whisky have never made sense to me. 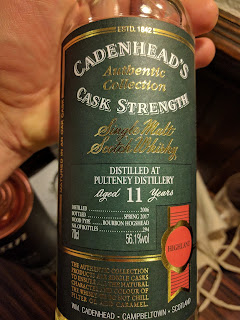 I've always thought that his description of Pulteney as the Manzanilla of the North was one such utterance, a phrase coined more for its similarity to "the Athens of the North" than for its aptness. And I am fairly sure that the phrase was coined by Jackson.

For example, in The World Guide to Whisky (1987) he says, "The whisky, called Old Pulteney, has been compared to a Manzanilla", but neglects to tell us who was doing the comparing.

But this bottle, a Cadenhead's 11 year old bottled at cask strength, from a bourbon hogshead, has given me pause for thought.

Initially it merely seemed like a whisky which had been bottled too early, a harsh raw dram lacking in pleasure, and very awkward alongside the handful of well aged malts also tasted that evening. But that brash, abrasive character is coming in my mind to seem more and more like the saltiness of youthful fino from Sanlucar.

I recall that Jackson began writing about whisky during the last boom, at a time when demand was running ahead of supply, and before the filling of the whisky loch in the Eighties led to many producers promoting well aged expressions as the norm.

In the World Guide to Whisky many of the expressions he describes are fairly youthful - Highland Park, Strathisla, Rosebank, and Blair Athol all at eight years old, Balblair as a five year old, Glenfiddich Pure Malt without an age statement, and plenty of others.

The expression of Pulteney included in the Guide is the eight year old bottled by Gordon & Macphail. I wonder if the whisky I tasted last night - youthful, with little cask character, rather abrasive - is the modern equivalent of that early eighties expression?

I suspect that I'll never have an answer to that question, but at that time there wasn't anything like the same level of interest in cask management as there is today, and I reckon it's at least a plausible suggestion to say that the malt that Jackson tasted and described was dominated by distillate character, just like last night's dram.

And whilst I'm waiting for an answer, I shall go and reread Jackson in the light of my Pulteney revelation.
Posted by rodbod at 15:40