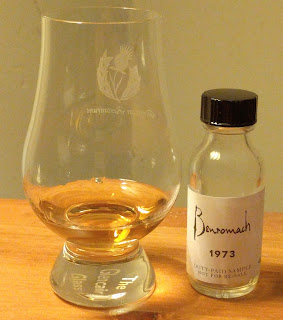 It can be difficult to let go of one's prejudices, and this is doubly the case when one is tasting (that's why blind tasting is such a useful tool).

Alas!, when I first tasted this wee sample at the end of last year, I let my mental picture of pre-Gordon & Macphail Benromach interfere with my perception of what I was actually tasting, so that it seemed, if not humdrum, then perhaps pedestrian, not worth it's £1400 price tag.

So I was pleasantly—nay, delightfully—surprised when I polished off the last of the sample tonight. Why? In a word, rancio. This is such a rare thing to find in a Scotch, and it's such a delicious flavour. Especially when it's combined with maltiness rather than the fiery fruit of brandy.

Now, I've described rancio as a flavour, but it's perhaps more accurate to say flavour modifier. In very old brandies of good quality, the fruitiness will sometimes take a turn to the dark side, with suggestions of over-ripeness or a faint hint of hothouse rot.

By contrast Scotch, perhaps because of the cold climate in which it matures, is more likely to acquire a slight fust, something which speaks of the damp, earthy warehouses and old oak casks in which it has aged.

So as I say, it was a delightful surprise to taste a malt with rancio. Aside from that, there was some of the fust that old whisky takes on, as well as the faintly grimy, garden-shed-and-old-engine-oil character that I only ever find in Springbank, Benromach, and some other whiskies distilled in the Seventies or earlier. It wasn't a very intense dram, but oh! such lovely flavours.