In the middle of a Twitter tasting organised by Steve Rush for the Lakes Distillery I found myself, slightly to my surprise, thinking of Campbeltown. 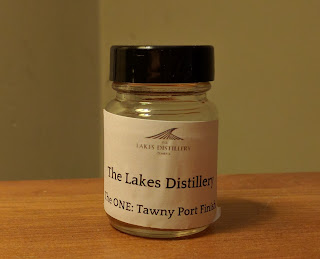 The whisky on tasting was a tawny port cask finished version of The One, which is a British whisky blended with spirit from across the UK, and there was about it a faint but distinct air of tarry rope, or coal tar soap, or some such. In other words, Eau de Kintyre.

Having enjoyed it, I thought I would finish off my sample in comparing it with the genuine article, in the shape of Springbank 12 Year Old Cask Strength.

I know, I know, it's a completely unfair comparison. One of these is a blended whisky, and very likely with a component average age of not much more than three, while the other is a full strength malt from the most old school distillery of them all (and regarded by many folk as the best of distilleries). Nevertheless, dear reader, compare them I did. 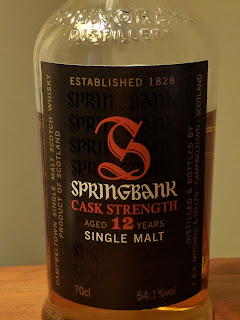 The very act of making the comparison seemed to change the blend. The smoke went from being tarry to a sort of damp earthy burnt wood - still pleasant, but less impressive than previously. On the other hand the red fruit notes were still there, a tasty distilled version of the sort of jam used to fill doughnuts. Yep, still a decent blend.

But, alas, no match for the Springbank. Next to the blend it seemed a complex, slightly argumentative dram, with very faint smoke, a sour-sweaty-farmyard note right next to the most refined feminine perfume, dry maltiness, and the faint shadows of other flavours beyond those (is that marzipan? Next to the frangipane? I can't be sure).

So, well done to the Lakes distillery for a really interesting blend, and well done again for managing to invite comparison with Springbank. And now I'm away for another glass of Springbank.