It's fair to say that Whistlepig have had a few hiccups along the road, and the company founder, Raj Bhakta, seems to have a knack for getting himself into hot water. On the other hand they have also been very highly praised for some of their whiskies. While I'm definitely in favour of transparency, which arguably has been a bit lacking with Whistlepig, it remains the case that what matters most is how a whiskey tastes. And this whiskey tastes rather fine.

The Vermont based company have only been distilling their own whisky for a couple of years now, so I guess it'll be a while before they can offer something which is 100%, grain to glass, Whistlepig. In the meantime, they have released Farmstock #001, which I'm told is a blend of their own distillate with bought-in Canadian and U.S. rye. 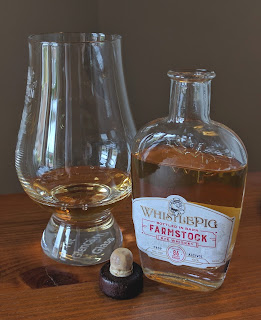 Nose: There's quite a bit going on here. The rye is mild and sweet, like beery rye bread, or rye and ginger biscuits (are they a thing?). It's also fruity, in a sappy green apple kind of a way, then there's an emulsion paint note. Before you stop reading, I should explain that "emulsion paint" is an aroma I often find in Scottish Grain whiskies and bourbons. It's not a bad thing, it's just a Quercus Alba thing that I haven't figured out the correct name for yet. I like it when I find emulsion paint in a whisk(e)y. The whiskey is very soft on the nose and not spiritous at all.

Palate: sweet, rounded, and mouth coating or slightly oily.  Mild nutty rye bread spice, burnt bread, well fired Scotch morning rolls. After a while it becomes much more fruity: specifically apples and pears. Towards the finish it dries out a little, and develops a prickly warmth. With time I also found a mineral quality in it, which I liked.

Conclusion: There's lots of soft rye spice, but rather less of the toffee, coconut, and caramel notes that white oak imparts to most American whiskies. It's also much fruitier than I expected it to be. Whilst it's not life-altering, it's a very enjoyable drop. I reckon that it's over-priced, but that likely reflects the hype surrounding Whistlepig. Perhaps Mr Bhakta belongs to the "There's no such thing as bad publicity" school of thought.