Miltonduff doesn't really figure in any list of distillery greats. There's hardly an official bottling to be had, seeing as Chivas Bros. main use for it is to blend into Ballantine's (alongside the blessed Glenburgie).

So it was a real pleasure to taste and enjoy this bottling by Morrison & Mackay, the Perthshire firm to whom the Scotch whisky industry turns when in need of a whisky liqueur (they also bottle some cracking malts). 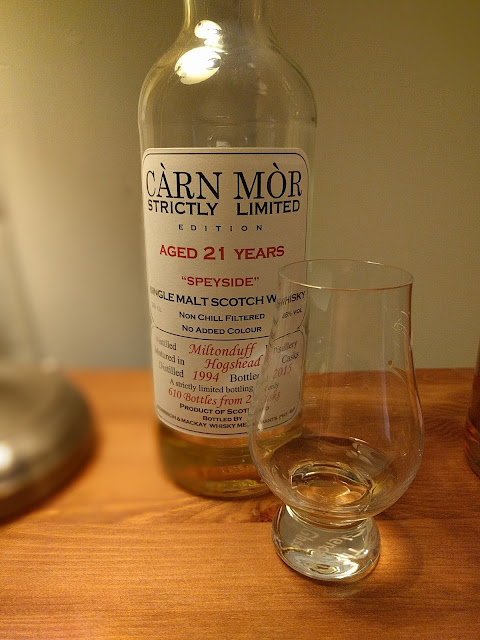 It's a dram which is both light in colour and light of body, although far from lacking in flavour. In fact, it manages that special trick of keeping several different flavours going at once in the back of the mouth. There's a waxy yellow fruit note, and a tangy Edinburgh rock thing, plus the corresponding chalkiness (which doesn't always happen, by the way). There is also a fizzy, sherbet-y lightness.

The cask flavours are very much in the background and integrated with everything else which is going on, allowing the distillate character to shine through.

Of course, this is a bottling from just two hogsheads, so it's probably all been drunk by now. So what? There's always another whisky to find. There's probably another Miltonduff out there, just waiting for you. Go get it!

About Miltonduff
Built in 1824 near Elgin, Miltonduff has seen several changes of ownership; since 2005 it has been run by Chivas Bros. It was one of a handful of distilleries to be fitted with Lomond stills, making a whisky called Mosstowie. Nowadays it is most important as a component of the Ballantine's blend.
Posted by rodbod at 01:23